Simple acid−base reaction between commercially available amino-tagged Ru olefin metathesis catalyst and highly acidic, easily available, and extremely stable MOF, (Cr)MIL-101-SO3H, has been successfully employed for a very robust immobilization of the catalyst even in polar, “green” solvents. Using this catalyst, essentially ruthenium free (<10 ppm) olefin metathesis products can be obtained upon simple filtration. What is more, the immobilized catalyst shows higher activity in comparison to the unsupported catalyst. For details, see our contribution to a special issue of Organometallics dedicated to organometallic chemistry within Metal–Organic Frameworks (MOFs): 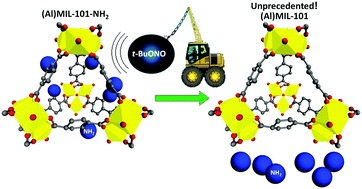