Metal-Organic Frameworks (MOFs) are crystalline, porous, three-dimensional coordination polymers in which inorganic building units are joined by organic linkers.[1] Through judicious choices of bridging ligands and metal centers, their porosities and functionalities can be fine-tuned for multiple applications, such as gas storage, separation processes, energy storage (batteries, supercapacitors), drug delivery, ion exchange, sensor technology, and many others.

MOF-s as catalysts of organic reactions

MOFs are also dream compounds for catalysis, mainly because:

What makes MOFs truly distinct is their easily tunable, regular, porous architecture, which provides unique nanoenvironment for the immobilized catalysts; environment that might be compared to that of active sites of enzymes. 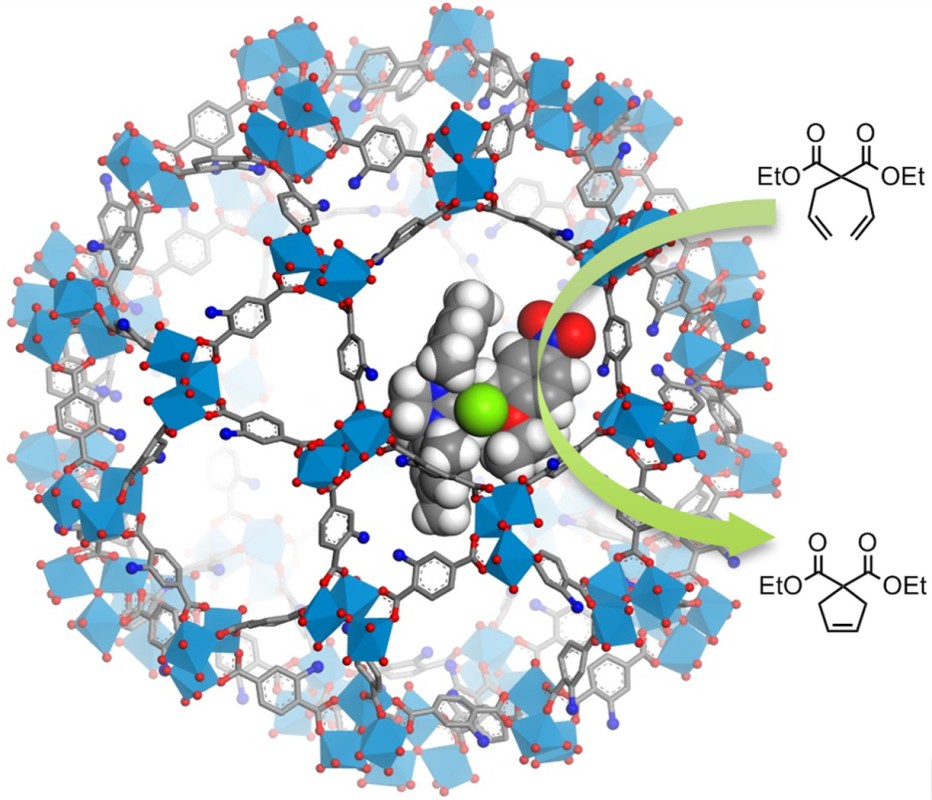 One way of making MOFs catalytically active is to permanently immobilize homogeneous catalysts in their pores. In this way, the advantages of homogeneous and heterogeneous catalysis can be combined, and the resulting catalysts may also gain new, unique features, such as size and shape selectivity or tandem catalysis in cases where different catalysts are enclosed in either the same or in different materials. As part of the IDEAS PLUS project funded by the Polish Ministry of Science and Higher Education we studied various ways of catalysts immobilization in MOFs: by simple sorption,[2] acid-base reaction,[3] ion exchange, post-synthetic pore closing [4] and by covalent attachment.[5] We have also developed new methods of post-synthetic functionalization of MOFs.[6],[7]

MOF-s as „intelligent” and adaptive materials

The aim of our latest MOF project is to create a new class of materials that will combine the robustness and stability of the newest generation of MOFs with the adaptive properties of constitutionally dynamic materials. Such constitutionally dynamic MOFs will be able to reversibly change their constitution and properties through exchange and recombination of their sub-components in response to external physical or chemical stimuli, while maintaining their basic topology and reticular structure. For example, a chemical stimulus such as an added template (toxin, drug, analyte, etc.) should induce the incorporation of building blocks that have the strongest affinity to this template, followed by their self-organization inside the framework so as to maximize the strength of template binding. In another line of research, we aim to demonstrate that the reversible post-synthetic functionalization of MOFs’ pores with shape-persistent building blocks could be utilized for the synthesis of molecularly imprinted MOFs, and hence allow unprecedented control over the spatial distribution of various functional groups in the same framework.

The introduction of constitutional dynamics into MOFs will enable various mechanisms of selection, resulting in smart materials able to design themselves under the influence of their environment.  Currently, we are looking for BSc, MSc, and Ph.D. students willing to join this project.

The vast majority of MOFs cannot conduct electricity; moreover, some MOFs are among the best insulators known to mankind. However, through judicious design, it is possible to construct MOFs with very high conductivities and, at the same time, very high porosities. Such a combination of features makes these materials highly attractive for various applications, including energy storage (supercapacitors and batteries), electrocatalysis, and sensing. One of the pioneers and leaders in this field is professor Mircea Dincă from MIT. Recently, owing to the Bekker fellowship from the Polish National Agency for Academic Exchange we have initiated a collaboration with prof. Dincă, which already resulted in the first common publication in Angewandte Chemie.[8] We are currently recruiting BSc, MSc, and Ph.D. students willing to work in a joint project with the MIT group.

Negatively charged species play fundamental roles in a range of biological, chemical, medical, and environmental processes. Accordingly, the development of receptors highly proficient in anion recognition, sensing, or transport has become one of the major areas of supramolecular chemistry.

In our laboratory, we design, synthesize, and investigate new anion receptors. Our major goal is to better understand the relationship between their structure and anion recognition properties. Thanks to this understanding it will be possible to obtain receptors that strongly and selectively bind desired anions, which is a prerequisite for their efficient detection, extraction, and transport through biological membranes as well as for other applications, such as catalysis and anion templated synthesis.

Anion receptors, sensors, and transporters based on 1,8-diaminocarbazole moiety

Progress in the construction of anion receptors is, to a large extent, the result of the development of simple, organic, hydrogen bond donating units that exhibit strong affinities towards anions. Fundamental knowledge about their precise structure, conformational preferences, anion affinities, etc., allows chemists to successfully construct more and more potent receptors with improved affinities, selectivities, and sensitivities for anions. What is more, building blocks with high anion affinity enable the use of anions in controlling self-organization processes, such as, for instance, anion templated synthesis of rotaxanes and catenanes.

Within the project funded by the National Science Centre, Poland, we study uncharged receptors derived from 1,8-diaminocarbazole – a particularly versatile building block developed in our team. It combines several attractive features such as:

As part of the project, we synthesized a number of model 1,8-diaminocarbazole derivatives and systematically investigated the influence of their structure on anion binding and sensing properties.[9] It turned out that even simple diamide derivatives of 1,8-diaminocarbazole have an extremely strong affinity for oxyanions such as carboxylates, phosphates, and, especially, sulfates. What is more, these compounds show a very promising fluorescent turn-on response to some anions, which makes them excellent candidates for the construction of optical sensors.[10],[11]

We have also discovered that the doubly charged sulfate anions can bind two flat carbazole receptors at once, forcing their orthogonal or parallel alignment (depending on the substituents).[12],[13] Thanks to this, sulfate anions can be used as templates for the synthesis of topologically non-trivial structures such as catenanes and rotaxanes (vide infra).

Anions are typically too hydrophilic to penetrate through lipid bilayers spontaneously and hence facilitated anion transport through biological membranes is essential for life. For example, cellular respiration, the process of energy production through the oxidation of organic compounds in cells, requires the transport of a number of different anions: chlorides, bicarbonates, carboxylates, and phosphates. In cells, this function is carried out by specialized proteins, and their dysfunction can be the cause of serious diseases. The search for synthetic anion transporters, i.e. compounds capable of capturing anions from aqueous solutions, transporting them through biological membranes and releasing them into the solution on the other side, is, therefore, an extremely active area of ​​research in supramolecular chemistry.

So far, the vast majority of research activity in this area has been limited to the study of chloride transport, despite in nature the transport of other anions also plays an important role. This is probably due to the lack of direct and easily available methods to follow their transport across lipid membranes in real-time. Recently, in collaboration with prof. Alexander Kros from Leiden University, we have developed a new, direct method for studying the transport of a number of biologically important anions.[14] We are currently using it to develop transporters that selectively carry selected anions through biological membranes. Synthetic transporters for deprotonated amino acids, nucleotides, metabolites, or drugs are likely to have interesting biological activity and may find applications in medicine, sensor technology, and separation of mixtures, including mixtures of enantiomers.

In turn, in collaboration with prof. Roberto Quesada from the University of Burgos, we study the ability of our carbazole receptors to transport chloride anions. Highly active chloride transporters may find applications in the treatment of cystic fibrosis, a common genetic disease caused by the disfunction of chloride channels.[9, 15]

Most recently, we have developed a pH switchable anion transporter, with physiologically relevant apparent pKa of 6.4. Such compounds may be potentially useful as anticancer agents because they should be more active in the more acidic cancer cells. [16] 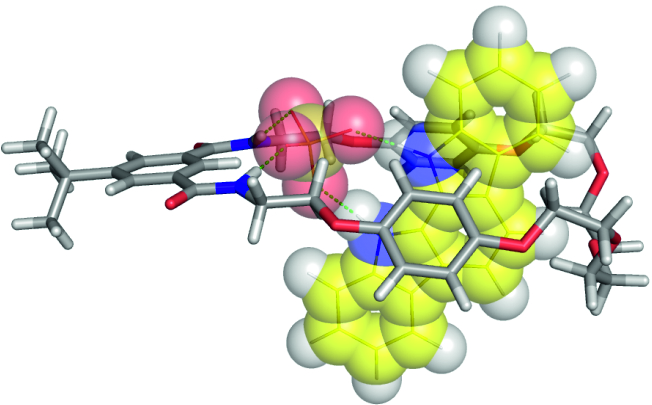 The use of anions as templates in supramolecular synthesis is a rapidly developing field of research in supramolecular chemistry. Rotaxanes and catenanes obtained with the use of anionic templates have built-in 3D cavities, which allow them to strongly and selectively bind anions, in particular the anions that templated their formation. Moreover, when equipped with fluorophores, chromophores, or electrochemically active groups, these interlocked structures may become selective sensors for anions (see scheme).

Owing to the “Iuventus Plus” grant from the Ministry of Science and Higher Education we have developed sulfate templated synthesis of fluorescent catenanes based on our 1,8-diaminocarbazole building block. These catenanes have been shown to have an outstanding affinity for sulfate anions, even in solutions with high water content. [17]

Photocontrol over molecular recognition is an important step towards the construction of molecular machines and opens interesting perspectives in supramolecular chemistry and nanotechnology. Potential applications include an active, light-driven transport of molecules through lipophilic membranes or controlled binding and release of active substances.

Within the “Homing” project from the Foundation for Polish Science, we have constructed the first photoswitchable ion pair receptor. This work was published in the prestigious Journal of the American Chemical Society: [18]

The structure of unsubstituted 1,8-diaminocarbazole is a hybrid of aniline and pyrrole – precursors of two important conducting polymers. In collaboration with prof. Skompska from our Department we discovered that this new precursor has the unique ability to effectively electropolimerise from both aqueous and organic solutions, and the resulting polymer is an excellent support for the immobilization of enzymes, synthesis of metal nanoparticles and other applications.[19-21] Therefore we developed a practical, multigram synthesis of this interesting monomer.[22]